The original cell theory states that the cell is the basic structural and functional unit of living organisms and all cells come from other cells. The scientists Matthias Schleiden and Theodor Schwann are credited with establishing the cell theory in 1839. However, there was a lot of work done over the previous centuries which paved the way.

The Italian scientist Galileo Galilei is credited with building the first microscope in 1625. It was a logical step for him to take from his groundbreaking work with telescopes and astronomy in 1609. In 1665, Robert Hooke, a British scientist, looked at a thin slice of cork under the microscope and saw a honeycomb structure made up of small compartments he called cells. The first person to see living cells under a microscope was Anton van Leeuwenhoek. In 1670, Leeuwenhoek significantly improved the quality of microscope lenses to the point that he could see the single-celled organisms that lived in a drop of pond water. He called these organisms “animalcules,” which means “miniature animals.”

Microscopes and science in general advanced throughout the 1700s, leading to several landmark discoveries by scientists at the beginning of the 1800s. In 1804, Karl Rudolphi and J.H.F. Link were the first to prove that cells were independent of each other and had their own cell walls. Prior to this work, it was thought that cells shared their walls and that was how fluids were transported between them. The next significant discovery occurred in 1833 when the British botanist Robert Brown first discovered the nucleus in plant cells.

From the years 1838-1839, the German scientist Matthias Schleiden proposed the first foundational belief about cells, that all plant tissues are composed of cells. His fellow scientist and countryman Theodor Schwann concluded that all animal tissues were made of cells as well. Schwann blended both statements into one theory which said 1) All living organisms consist of one or more cells and 2) The cell is the basic unit of structure for all living organisms. In 1845, the scientist Carl Heinrich Braun revised the cell theory with his interpretation that cells are the basic unit of life.

The third part of the original cell theory was put forth in 1855 by Rudolf Virchow who concluded that Omnis cellula e cellula which translates roughly from Latin to “cells only arise from other cells.”

The modern version of the cell theory includes several new ideas that reflect the knowledge that has been gained since the mid-1800s. These include the knowledge that energy flows within cells, hereditary information is passed from cell to cell, and cells are made of the same basic chemical components. 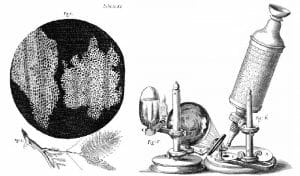 The image above shows a drawing of the microscope set up used by Robert Hooke in 1665 in which he first saw cells in a thin slice of cork. The circular inset shows the drawing Hooke made of the honeycomb structure that he saw under the microscope.