What Do Biogeochemical Cycles Connect?

The biogeochemical cycles on Earth connect the energy and molecules on the planet into continuous loops that support life. The basic building blocks of life like water, oxygen, carbon, sulfur, nitrogen and phosphorous are recycled and go back into their respective cycles repeatedly. The biogeochemical cycles also create reservoirs of these building blocks such as the water stored in lakes and oceans and sulfur stored in rocks and minerals.

The biogeochemical cycles have existed on Earth for billions of years and the elements that make up a modern-day human (or anything else on the planet) have been part of many other organisms and non-living molecules in the past. The process known as nucleosynthesis that occurred during and after the Big Bang was the ultimate source of all the materials that make up the universe. For example, the lighter elements hydrogen and helium formed within the first few minutes of the Big Bang and went on to help form the first stars. When the stars got old and eventually exploded, these elements went on to be incorporated into other cycles, processes, stars and planets in the universe. In addition to recycling elements and molecules, the explosion of stars also creates new materials like metals that are expelled into space and become part of the whole process. 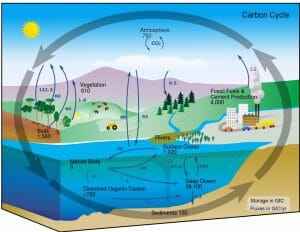 The image above shows the carbon cycle, one of the biogeochemical cycles on Earth that recycles and stores the elements essential for life.